According to History dot com “On July 19, 1910, the governor of the U.S. state of Washington proclaimed the nation’s first “Father’s Day.” However, it was not until 1972, 58 years after President Woodrow Wilson made Mother’s Day official, that the day became a nationwide holiday in the United States.”

Fathers are Heros, this is an inspirational video found on YouTube:

Father’s Day was inaugurated in the United States in the early 20th century to complement Mother’s Day in celebrating fatherhood and male parenting.”

Fathers day celebration dot com shares on their site, “History of Father’s Day Festival as seen today is not even a hundred years old. Thanks to the hard work and struggle of Ms Sonora Louise Smart Dodd of Washington that just as we have set aside Mother’s Day to honor mothers we have a day to acknowledge the important role played by the father. ” The sites continues, “The idea of Father’s Day celebration originated in Sonora’s mind when she per chance listened to Mother’s Day sermon in 1909. Fairly mature at the age 27, Sonora pondered if there is a day to honor mother then why not for father? Sonora felt strongly for fathers because of the affection she received from her own father Mr William Jackson Smart, a Civil War veteran. Sonora’s mother died while childbirth when she was just 16. Mr Smart raised the newborn and five other children with love and care.  Looking at the heightened popularity of Father’s Day in US, President Woodrow Wilson approved of this idea in 1916. President Calvin Coolidge too supported the idea of a national Father’s Day in 1924 to, “establish more intimate relations between fathers and their children and to impress upon fathers the full measure of their obligations”. After a protracted struggle of over four decades, President Lyndon Johnson signed a presidential proclamation declaring the third Sunday of June as Father’s Day in 1966. Then in 1972, President Richard Nixon established a permanent national observance of Father’s Day to be held on the third Sunday of June. Sonora Smart Dodd was honored for her contribution at the World’s Fair in Spokane in 1974. Mrs. Dodd died in 1978 at age 96. ”

From all of us at DW Video we wish fathers worldwide a HAPPY FATHERS DAY! 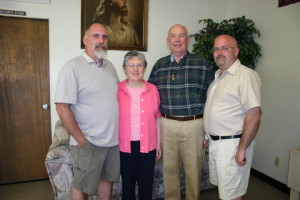 My family, God Bless my dad. My brother, mom (God Bless your soul – you are missed), our dad and myself.